It’s week 31 – last week of July. Not a raindrop in sight, just clear blue skies. Other than watering, I figured there’d be not much to do; but here I am, sunburnt, having spent the entire day Sunday in the garden. It took some coffee.

Most of the work this weekend was a result of potentially having screwed up the timing of some plants.  While crops were harvested, as expected; the potatoes were not. I also noticed that all my pumpkins are swollen and orange as if it was October. Did I plant things too soon, or has it been to warm?

I had pulled a potato because the crop had gone limp. Having not grown potatoes before, the foliage looked to me like they did not dry and brown as many plants do when “finishing” in the fall. Instead, these were still relatively green, luscious and had some signs of continual growth.

I pulled one and found it was rotten like one I had pulled a few weeks prior. So, naturally, I panicked. I employed my daughter and we pulled up all the potatoes. Luckily I found that very few were rotten – Instead: 81lbs of Yukon Gold! 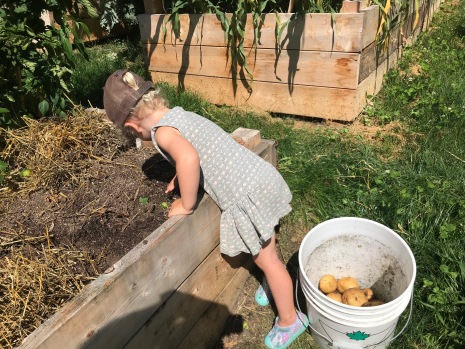 But this created a dilemma: When harvesting in July, are these considered Spring potatoes, or full-season? Is the distinction even warranted? I have scoured the internet, but found few answers to my concerns. I know, however, that spring potatoes are thin-skinned and should not be stored, whereas, full season potatoes are allowed to cure, and have the benefit of late-season skin-toughening. I am hoping to find out if I can store them – but even if I “can”, I maybe shouldn’t as temperatures are mid 20’s and not yet ideal.

In the meantime, we’re eating many, and selling a few at our “now mildly successful” road-side-stand. If I can find a potato meal my kids love, I may not need the harvest-questions answered until next year.

(PS. If you’re looking for a way to make money: Organic celery is a rarity. We were lucky and with little care our celery looked commercial grade, but with all the leafy-goodness. I had “cut-and-come-again” with a couple plants and cut up a few others for freezing, but every other one went to the stand, and was gone the next day. $6 a bunch was what we ended up selling them as. I have no idea what the threshold is, but we’ll be planting more of it next year.)

The garlic is likely ready to be pulled, but after pulling one hard-necked variety, I found 4 cloves attached with very little papery-skin. I’ve grown garlic before and found it is delicious, but also, not great for storage.

Onions are probably coming soon too, but I think early August seems about right.

Corn would be done, if I wasn’t allowing it to dry for flour/meal. I’m not sure what this variety will lend itself best too – I’ll keep you posted. By the way, it is ENORMOUS!

Chickpeas, buckwheat, and mustard were harvested – it’s all looking great. The mustard was missed however, and I lost most of the harvest. Next year I’ll give the plants greater spacing and more consistent watering to try and tighten the harvest window.

With some beds cleared, I mulched with hay and then planted into the hay in order to use the mulch more efficiently.

The buckwheat bed has become home to lettuce, carrots and beets, planted every two weeks. The old lettuces were torn out to make way for arugula  (also planted every two weeks) and a crop of Rutabaga….I’m curious how that’ll go…and if I can sneak it into my kids’ meals. The mustard bed has been planted with cabbage and brussels….This is the second crop of brassicas. All but my brussels have been harvested from the spring, so I’m hoping for the full lot to harvest from during the fall and winter. The bed that was split with arugula, poppies and snap peas is also now also dedicated to brassicas: cauliflower, broccoli and kale. Finally, after removing the chickpeas I found that some of the asparagus seedlings (while no bigger than they were in March) had survived. I planted 5 more established asparagus I purchased, and I am still decided what else to do in that bed.

We also did lots of watering, picked fruit, including most of our figs (which all seem to ripen at once) and tied sunflowers and corn to sturdy objects.

We really are in full-swing here. Dinner on Sunday was smokies from a local producer (but generic buns), and the remaining from our garden: fresh-baked potato chips, roasted Brussels sprouts, sauerkraut, mustard (last year’s batch), and a salad of lettuce, arugula, carrot and tomatoes. It’s all so satisfying!

From a bio-control perspective….I need to control birds! Haha the jerks have harvested almost all of my blue berries. Next year I’ll be tenting them as they ripen. They were also eating the mustard seeds, which I was happy to share until I realized how much had been wasted.

The potato pest wasn’t identified. The potatoes smelt so bad, and I wanted them gone. However, I should have taken samples. They were tiny and white – more like a grub than a worm and had hollowed out the odd potato through only one main entrance…or so it seems. So it’s likely an adult burrowed into the tuber and laid hundreds of eggs. As I had treated that bed with the predatory mite Gaeolaelaps Gillespii, my option for next year will be to employ the rove-beetle, Dalotia coriaria. The beetle is substantially bigger, so it may be able to take down the adult pests before damage is done to the potatoes.

This continues to be a difficult year for aphids. There is no shortage of aphid predators, but the resident black aphid is consistently moving from host to host (uncommon for aphids, who are often host-specific).

The good news is nothing except for a couple of kale have been badly damaged (and that was from the cabbage aphid), so I can only hope that all the aphid predators are getting their fill and becoming more numerous as well. If next year is a good year for aphid control, I will assume it has to do with the availability of predators from this season.

I did, however, release our newest product into my yard – while I have the labels made, it is still in research mode and not yet available to buy: Eupeodes americanus! The American Hoverfly.

It’s such a perfect addition to gardens – adults pollinate flowers and their larva eat aphids: it’s the 2 for 1 deal! Once the research is complete I may recommend inoculating your yard with the hoverfly in the spring for fruit set and aphid prevention, but, like Ladybugs, you can always attract native ones by planting lots of flowers. (More on the hoverfly coming soon.) But remember, if you are having difficulty with aphids, and truly worried about your plants, blast the aphids off with a water stream, control the ants with a boric acid solution, and if you still need it, buy aphidoletes aphidimyza. They are not aphid-specific (like aphid parasites are), they leave no mummies and the adults eat the honeydew off your leaves, which is great for cosmetics or if you’re finding annoying sticky areas under a tree.

As we are now truly in the dry-season I’ll be keeping a look out for spider mite damage. We’ll also be seeing whitefly soon, likely on our tomatoes. And I’ll be keeping a look out for thrips and leafhoppers – not because they concern me, but because I want to see what the local, native predators are. Maybe I can catch and rear a predator and release it to the public next year! But, to release a product it has to be cosmopolitan to the entire continent, so, if you see any voracious looking predator where you live, let me know – we’re in this together!

I’ll leave you with two photos: One of a trap/banker plant in our plant production house: Ladybug rolling around in baby’s breath pollen, and an Encarsia formosa tag to control whitefly. The second is dinner at the beach with my parents and brother’s family. The Salish Sea is the place to be.

One thought on “Let the Harvest Begin!”